Once upon a time the PJCC did a regular book club at its meetings, and we've decided to start doing this again because it was tons of fun. The first book we'll all be purchasing and going away to read will be Book of Lists by Paul Rainey (small press). The book costs £10.95 and can be grabbed from the small press section at Travelling Man. We'll be getting more copies in this week, so if you come in and there are none just pop back later! We'll be reading this one for the Comics Evening on 6th April, 6:30pm onwards at Travelling Man.

If you have any ideas for further books to read, e-mail them through: tmne_smallpress@yahoo.co.uk

This summer, the PJCC will be launching a music-themed anthology on the unsuspecting public. The form of this item and its launch are still undecided, but make no mistake - it will be epic. If you think this is something you'd like to get involved with, here's what you need to do:

1) Find an unsigned band, local or otherwise, and ask them if you could use one or more of their songs as a theme/stimulus/inspiration for your comic. Further to that, if they are local, ask them if they'd be up for playing at the launch event too. Make sure you include this, or your own version of when asking:

"The Paper Jam Comics Collective is a non-profit creative community, so all money made from the anthology and launch event will be put into our next project. For that reason, we can't offer bands any money for the use of their music, or for their live performances. However, the collective will cover the cost of equipment hire and of course the cost of printing the comic and burning the CDs. We're hoping this will be a mutually-beneficial endeavour, and it will generate a lot of exposure for the bands involved as well as the comic book artists. Please verify that you understand and agree with these terms so that everyone is on the same page."

If things get way legal, just drop me a line and I'm sure we can sort it out: tmne_smallpress@yahoo.co.uk

2) E-mail me when you've had a "yes" answer from a band, or if you want to submit but can't find a band. That means I can hook people up and make a "playlist" if you like, so we know that nobody is doing the same band twice and we can get an idea of numbers. We haven't got a definite deadline or format for submissions yet, but I will be releasing one shortly after our History...and that anthology has been released, so point number three:

Posted by Paper Jam Comics Collective at 3:44 PM No comments:

There was a whole crowd of Paper Jam members at the P.R.E.S.S. event at Washington Arts Centre yesterday. Andy and Gary were minding the stall all day, with support and nattering from Paul, Martin, Oscillating Brow and Mike D.

Business was slow (as is usually the nature of these things), but everyone who came was enthusiastic for the cause of independent publishing, and we made a few sales and had a lot of nice chats with people. Other stalls included comics, independent book publishers (of everything from poetry to horror fiction to children's books), and gorgeous art books (literally - books made into art). Mike D also produced and set up a wonderful zine trail especially for the event, which had inquisitive parties scouting the building for pages of a miniature zine.

Representatives of top London comics and zine team We Are Words + Pictures were there selling copies of their anthologies and individual works. It was a pleasure to have a natter with them and force them to buy some of our stuff.
Here's the obligatory photo of our stall... 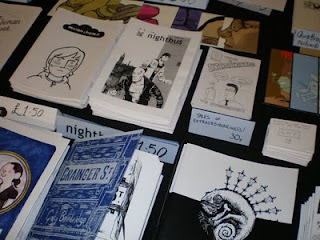 ...why we keep taking the same damn photo at every event is beyond me. The covers look nice, though!

Big thanks to Leonie at P.R.E.S.S. for organising the event and inviting us to come aboard.

Posted by Paper Jam Comics Collective at 7:29 PM No comments:

Space Monkey review in The Crack

Space Monkey has been reviewed - very favourably - in top North East listings magazine The Crack.
Singled out for praise are Gary Bainbridge and Andy Waugh's silent six panel gags, and in particular, Martin and Sophie Newman's 'Alan The Confused Tortoise'.
You can read the whole thing below:

The Pilot Episode of the North East Geek Feast - a new podcast by Lily Daniels and Daniel Clifford is now available.

Check it out.
Posted by Paper Jam Comics Collective at 1:39 PM No comments:

The Paper Jam Comics Collective will be at Washington Arts Centre next Saturday (10th April) for the P.R.E.S.S. Event. Lots to see and do - check out the P.R.E.S.S. website for more details. As well as our usual selection of comics and zines, we'll be featuring the debut of some of our 24 Hour Comics done last month.

The PJCC will be out in force:
We'll be looking forward to meeting We Are Words + Pictures.

Stop by if you're in the area!
Posted by Paper Jam Comics Collective at 8:00 PM No comments:

Next Anthology : History ... and that

Our next anthology is 'History... And That'.

We intend to detail (in chronological order) the most noteable moments in history, from the Big Bang to the End Of The World (which is in a couple of years if you believe the Mayans). You can choose any time period you like, whether that be Ancient Greece, or the lesson you once had on Ancient Greece at school. Be as frivolous with the facts as you like - this isn't a textbook. Your task is to (as Jack has previously noted) take the theme and milk its deliciously open-ended teets like a true time-travelling farmer!

Just let us know (in the comments or by email) which period of history you'll be going for, as we'd like to avoid too much duplication.
The deadline for submissions is 6:30 on Thursday 6th May, bring your work to our regular meeting in Travelling Man Newcastle on Grainger street, drop it off in the shop before then or email it to: tmne_smallpress@yahoo.co.uk

This one will be A4 and black and white, and the usual rules apply - two pages per person (so a writer/artist team could have 4 pages in total). Leave a minimum of a 1cm border to allow for possible cropping when we get this to print.
Have fun!
Posted by Paper Jam Comics Collective at 4:27 PM 6 comments:

Hi-Ex was, as you’re surely aware by now, the place to be last weekend.

Organised by artist Vicky Stonebridge and writer/editor Richmond Clements, Hi-Ex has gained a reputation for being one of the friendliest Comic Conventions in the land.

The Paper Jam Comics Collective had a table there for the first time, donated by Paul Scott of OmniVistaScope and Solar Wind fame. He couldn’t make it, we could. We will give him his table cloth back in the fullness of time.

As well as all five issues of OVS, our table consisted of the following:

We sold some of the above. It looked like this: 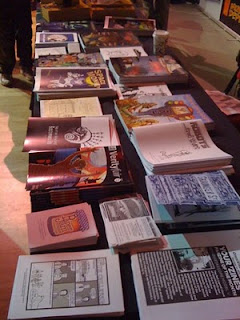 More importantly, we met some fantastic people, attended some excellent panels, drank some beer and contributed to the various jam comics going round the hotel bar in the evening. I've never seen so many comic fans and professionals in a single Chinese buffet before.

Mad props to everyone we met and all the good people selling their wares, especially to Dave Evans (Bolt01), titan of UK small press science fiction anthologies, who was selling bucketloads of Futurequake and Zarjaz to the 2000 AD-hungry crowd, many of whom had traveled across the Cursed Earth itself to attend.

The panels were all intimate, informal and good fun. Thanks to Stacey Whittle (Small Press Big Mouth) and Terry Martin (Murky Depths) for looking after our wares while the PJCC attended a few of the talks.

The panels we saw covered the Horror Genre in comics, a Charity Auction, the quite, quite mad Scottish Falsetto Sock Puppet Theatre Company, the enduring success of 2000AD and an audience with the Legend Cam Kennedy. There was a lot more, and the PJCC didn't get near the Judge Dredd Role Playing area, which we'd wanted to.

A weekend just wasn't enough to be honest. Thanks again to Vicky and Richmond. The days were just packed.

Posted by Paper Jam Comics Collective at 11:39 AM No comments: