After going really well, the good news is that it's coming back this year!

8th December, Newcastle City Library, 10am-5pm, be there or be square.

There'll be a bit of everything, loads of events for all ages (talks, workshops, panels, quizzes), and loads of comic creators attending.

And it's totally free - everyone is involved for the love of comics.

If you're in the North East and into comics, this event is for you.

Want to find out more? Maybe get involved? Go to www.cannycomiccon.co.uk for all the links.

If you missed last year's event, find out more about what happened and what folks thought of it by clicking here.
Posted by Oscillating Brow at 4:00 PM No comments: 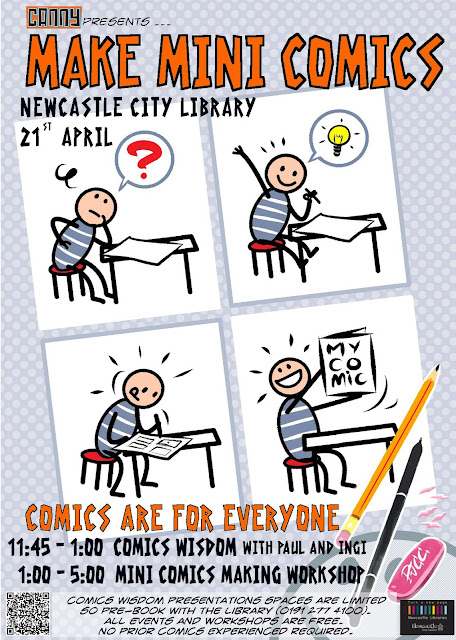 Happening very soon, put together by PJCCers Cuttlefish, the PXT, and Ingi.

It's going to be brilliant. A couple of talks, then some laidback comic-making (then probably the pub).

Whether you're a comic-making veteran or someone who's never done anything like this before, you're sure to enjoy it.

Five Years of Paper Jamming, Yo!

It's hard to believe that the Paper Jam Comics Collective started (albeit in an unnamed form) FIVE years ago - at the start of 2007. That is a long time in comics, proof that Jack and Mike have created one heck of an unstoppable-comics-beast-thing, and long may it continue.

But what is the crack with it all? If you're a new person interested in getting involved, what can you expect?

Well, here's a rough guide to the PJCC:

We meet up
Usually on the second and fourth Thursday of every month at Travelling Man comic shop. It kicks off around 6.30 (there's a bit of milling around chatting and saying hello while people turn up and the meat ot the meeting usually gets going in earnest by 7.00).

We like comics
As a rule, everyone who's part of the PJCC is into comics. You want to talk about comics of any sort, you will probably get a decent conversation at a PJCC meeting. Sometimes we have particular books or topics we might talk about, sometimes just general blather, but hopefully always kind of interesting.

Some folk are doing some things
First, it's important to note that this is not obligatory. You do not need to be working on a 5000-page graphic novel to be part of the PJCC. In fact, you do not need to have any interest in making comics at all. However, some folks do. And if you do and you want to tell people about your comic at a meeting, to get feedback or promote it, this is likely to be well received - speak up, pass around comics or sketchbooks, pitch your story; people will be interested and talk to you about it. Also if you're interested in something that someone else is doing - do feel free to ask them about it, people are usually happy to talk at length about their latest projects. If you're interested in any individual members we have some links at the side to their own websites and blogs and suchlike (or, y'know, there's google).

We make comics together sometimes
We've done eight cracking anthologies and the ninth is being compiled at the moment in readiness for being printed soon. Everyone draws a page or two, usually on a particular theme and we print up some copies and sell them at Travelling Man and at fairs and conventions and the like. Often we have ace launch parties. All the comics have ... And That as part of the title, suggesting in the local vernacular that the comics are all variations around a theme (e.g. Alcohol... And That is out latest and is of course about subjects relating to alcohol, er, and that).

We draw 24-Minute Comics
PJCC meetings are very informal and unstructured. Generally there's brief introductions to say hello to any new folk, then an opportunity for announcements, then people just blather on for a bit, maybe sketch their own stuff, and at some point someone will probably shout "Twenty Four Minute Comic?" which is usually greeted by mutterings of approval and a demand for paper.

How it works: everyone writes a word or phrase on a bit of paper, these are put into a hat (literal or metaphorical) and two are drawn at random. These together now form the theme. The object is to draw a comic (usually a single side of A4, though some people get more creative with the format) within 24 minutes on that theme. Artistic skill is absolutely not required and is usually seen as a hindrance, as speed and enthusiasm are the key attributes that make for success. You don't have to participate, but seriously: it is always super excellent fun.

The 24-Minute Comic is one of the PJCC's finest innovations - a variation on the well-known 24-Hour Comic (which PJCCers also do) but with a lot less sleep deprivation. Once the 24 minutes is up (traditionally noted by a 'ducks quacking' iphone alarm (it just is)) the resultant artworks are passed around the table to nods of approval.

We publish comics online
If people are feeling particularly enthusiastic then they may then scan their 24-Minute Comic and post it to Paper Jams - the home of 24-Minute Comics and other PJCC sketching craziness. Have a look now. Go on!

Get involved
Getting involved is very much encouraged. Help out at events, in organisation or staffing stalls. Swap tips on art or comic-making. Collaborate with each other. Contribute to and help with anthologies. Bring sweets. Long live the PJCC!
Posted by Oscillating Brow at 4:22 PM 5 comments:

Hello all! In a culture of fear, it is the duty of the common man to impose order. To this end, I propose that Paper Jam meetings from this moment on are held on the 2nd and 4th thursdays of a month. This has the advantage of being nice and regular and non-confusing, and much easier to inform new faces about. SOOOOO... the next meeting will be Thursday 12th January. 6.30ish at TM Newcastle.  Spread the word, ya mamma-jammas!
Posted by Paper Jam Comics Collective at 11:36 AM No comments: