The Canny Comic Con (Newcastle's entirely free comic festival which has previously run in December 2011 and December 2012) isn't exactly happening this year, but it sort of is.

First up, if you want to see a review of last year, including photos and a free download of the excellent Things We Wish We'd Known Earlier (or: How Not To Make Comics) panel, full of top comic-making tips (on mistakes everyone makes and how to avoid them!) CHECK THIS OUT.

Second, in a couple of weeks time on Saturday 7th December, instead of the usual CCC stalls, panels, workshops etc, for a change, there's going to be this: 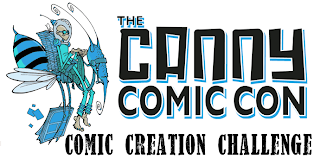 The CCCCCC? Whaaaaaat? It's a big comic-making jam. Totally open to everyone of all ages and abilities, and of course it's free. More info here!

See you there!
Posted by Oscillating Brow at 10:13 AM No comments:

When It's Time to Party, We Will Always Party Hard

Greetings members of the collective, casual readers and local creative types. This is my first post on here in a long time - I've been away, training to become a teacher, finding a job and surviving my NQT year. After missing only about 3 meetings in 4 years since founding the collective, I had to take a huge sabbatical and it was awful. I can only compare the feeling to a mother placing her first born in a wicker basket and floating it down the stream. However, I'm very pleased to be back in action and so awe-struck by everything that has been created while I've been away. Which, in turn, has gotten me all inspired to do something.

It's been eons since the last Paper Jam launch event, and even longer still since a launch that blew people's heads off their shoulders. We never officially launched Alcohol... And That, but it was released quite a while ago now, so I wasn't sure if that was appropriate. I thought we could create a new anthology and launch that, but then it kind of overshadows the achievements of the Alcohol anthology, which is amazing. It was a real conundrum, until I realised something: We don't need a reasonable excuse to stuff a room full of comics, cakes, beer and bands, because when is that NOT A GOOD IDEA?! And we can, of course, put the spotlight on this incredible anthology that has not been celebrated in the way it ought to while we're at it!

So I've been scoping out local venues, getting room rental prices and contacting all the talented people I know to get something together. There are a few options right now, but I want this thing to be awesome, so I have a favour to ask you, gentle reader. Please contact me (tmne_smallpress@yahoo.co.uk) if you know of any awesome and local:

I want to do this in the next month or two so don't hesitate to get in touch. All suggestions, even ones that may seem obvious, will be much appreciated. If you send me a really tasty 'best-kept-secret' I'll make sure you get on the guest list and I'll buy you a pint.

Posted by Paper Jam Comics Collective at 10:28 AM No comments: