Our new anthology - the Amazing Adventure Comics Machine - which will be A4 and in full COLOUR (a first for our anthologies) is almost ready. More info soon.

Paper Jam will be at: 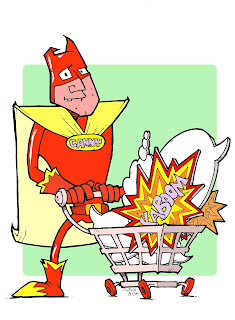 Making comics is, of course, a ridiculous endeavour.  Sure, with a combination of talent, dedication and business nous, some folks can make it a viable profession, but for many of us (and I have a creeping suspicion that I myself may in fact lack all three of those necessary qualities), there’s proportionally little financial recompense or artistic respect to be gained from small press comics. Which makes it all the more notable that quietly, without much fanfare, the Paper Jam Comics Collective has stuck around for a decade and is still meeting regularly and making small press comics.


Ten years ago, on Thursday 25th January 2007, I arrived at Travelling Man comic shop for the first meeting of what would, in time, come to be known as the Paper Jam Comics Collective. At that point it didn’t really have a name, and was still working out what it would be. Maybe a bit of a reading/discussion group? Maybe people would even like to put together a comic?


It was the project of youthful indie comics firebrand – and curator of the Travelling Man small press section – Jack Fallows. There hadn’t been an active small press creators scene in Newcastle since the demise of There Goes Tokyo / Bishi Bashi a couple of years earlier, so it was a bit of a leap into the unknown, but that first meeting attracted a solid turnout of intrigued persons (I must admit, though, that I don’t remember much of what was discussed). 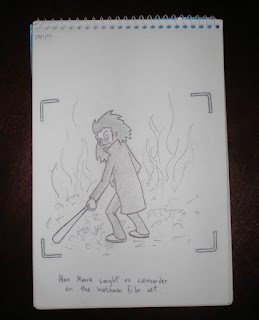 Apparently, I drew this. Cutting satire.


Within a few months we’d made a comic. A5, black and white, a couple of pages per person. For many of us, myself included, it was our first printed comics work. The title And That was settled on, a nod to Geordie vernacular use of the phrase to mean "etcetera" or "and so on", a decision which has stuck with all twelve of the subsequent themed anthology titles, e.g. Food …And That, History …And That, Halloween …And That   ......... and that.


With Jack at the helm, and with the support of Travelling Man managers Jamie then Mike, Paper Jam grew. It attracted new members, made more anthologies, and started to run tables at events to sell those anthologies – along with the comics that its members were making individually themselves.


Despite many members being highly efficient, talented, productive people, Paper Jam itself has always been inherently a fairly slapdash kind of organisation. What are its ambitions? Fame? Glory? Riches? Well, I suppose we wouldn’t say no, but really the baseline is that we manage to sell enough comics to pay for the printing of the next one. You might sneer at that as a rather modest ambition, but it’s one that we’ve succeeded at.


What else does Paper Jam want? To embody the idea that everyone can make comics. This isn’t quite officially enshrined anywhere (the rules, such as they are, are basically just to be nice to each other), but this is the heart of Paper Jam: it is open to anyone, regardless of skill, and its contributors range from professional artists who’ve drawn hundreds of pages of comics to folk who’ve never even considered drawing a comic before.


Pretty simple stuff. Yet despite all the blown deadlines, all the aversion to formal structure, all the nobly shambolic ‘just for craic’ attitude, the Paper Jam Comics Collective has proven implausibly durable. At various points I’ve wondered whether it might finally run out of steam, but somehow it persists. There’s no money in it, there’s no recognition. It’s just a bunch of people turning up and drawing, talking, supporting, collaborating, having a laugh and occasionally putting out a comic together.


What has it achieved though? What am I doing with my stupid life??


Well, there’s the thirteen – soon to be fourteen – anthologies; hundreds of pages of comics. And whilst the level of artistic finesse is naturally variable, there’s masses of inventiveness and variety. There are some really really good comics in all of those anthologies which still stand up to scrutiny now. 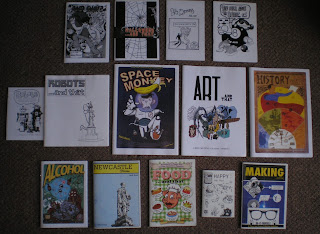 "A substantial and subtly influential corpus that would retrospectively be pored over by art historians, cultural theorists, and other weirdos" - Encyclopedia of Like Art And Stuff (2050).


We’ve collaborated with interesting people, like Durham’s Empty Shop Gallery, the Holy Biscuit Gallery, the Late Shows, and the Star & Shadow Cinema; we’ve appeared at many comic festivals (and zine fairs, book festivals, craft fairs and all kinds of other places). We’ve run all kinds of events ourselves. Paper Jammers have organised (and survived!) 24-hour comic marathons, gallery exhibitions and projects like the Canny Comic Con (first comic festival in the North East since the 90s) and the 10,000-copy National Science Week comic Asteroid Belter. Paper Jammers have become professional kids' comics workshop facilitators, comics academics, art market organisers, and, of course, they have made loads of amazing comics.


I’m not saying none of that would have happened without Paper Jam’s existence ... but I’m not not saying that either.


This is beginning to feel like it could get a bit slushy, so let’s wrap this up.


Money? Respect? Ehh, who needs it. I've had the good fortune to help make some pretty great comics and to make friends with some outstanding people. I can think of worse things to have done over the last ten years.