It's understandably been pretty quiet on this blog for some time, but it's worth highlighting a few things that members of Paper Jam have recently been up to!

Daniel has recently released his self-published novel on Amazon. It’s called Abigail and Caurinus: Plague’s Beginning. The story sees the young Abigail Winters alongside the Plague Doctor, Edgar Caurinus, as the two of them work together to stop a deadly plague that spawns terrible monsters. Check it out: https://www.amazon.co.uk/dp/B09Z7689RM

Sara has been working on an illustrations series with DerStandard: https://www.derstandard.at/story/2000134154222/sara-qaed-karikaturen-zur-pandemie

Britt has brought back Newcastle's finest craft market, the Make & Mend Market, on the first Saturday of each month in the Grainger Market: https://makeandmendmarket.co.uk/ (Facebook: https://www.facebook.com/makemendmarket)

Torgo Wells is working on several projects - an album cover for a local band, their own comic Stardozer, and a strip for the Comic Creatives UK anthology due out in August. https://www.instagram.com/torgowells/

Alex is also working on strips for the CCUK anthology. (CCUK is a friendly Discord server primarily for UK-based comic creators - of all levels of experience - to chat, share tips and collaborate: https://discord.gg/gyAHqaG5tB)
Mike has been making a comic about the Tyne and Wear Metro, and several other Paper Jammers have also contributed to the project. 10,000 (yes, repeat: TEN THOUSAND COPIES) will be out and available to pick up for free before June is out. 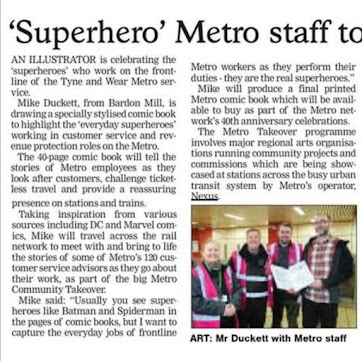 Paper Jam itself will be back touting its wares to the unsuspecting public at various events, the next of which are:
- Make & Mend Market, Saturday 4th June, Grainger Market 9am-5pm https://www.facebook.com/events/319936713539676/319936723539675/
- Handyside Market Pop-Up, Thursday 9th June, Split Chimp micropub, 6pm-10pm https://www.facebook.com/events/3250687495210407  (which also replaces our next monthly meeting)
Finally, whilst Paper Jam hasn't published an anthology since 2019's You Need A Holiday ...And That , loads of comics and drawings have been done by the group, many of which, you can see over on Paper Jams (the bit of our blog for comics, sketches etc). Hopefully, if we can sell a few comics, more physical anthologies will follow soon.
If you don't already own our fine anthologies and would like to, you can get them (at bargainous prices) from us: at events where we have a stall or usually in the Travelling Man comic shop small press section or from our online shop   :)
Posted by PJCC HQ at 12:33 PM No comments:

From April 2022, hopefully we'll be able to meet moderately safely regularly - still second Thursday of each month, 6.30pm - and our new home will be upstairs at The Split Chimp (8 Westgate Road, NE1 3NG - in the railway arches between the station and the castle), a lovely little pub that always has a good range of interesting beers on. 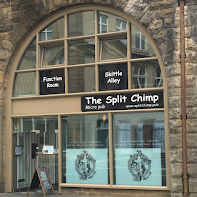