The Paper Jam Comics Collective are back from the Leeds Thought Bubble convention, having sold lots of comics and chatted to lots of people. 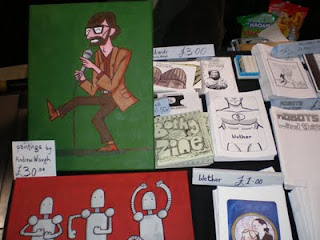 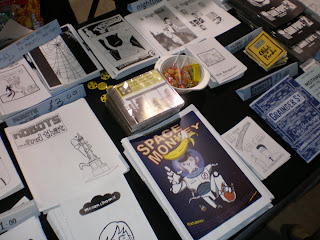 As well as the stall minded by Waugh, Bainbridge and Thompson (which sounds like the worst legal firm ever)... 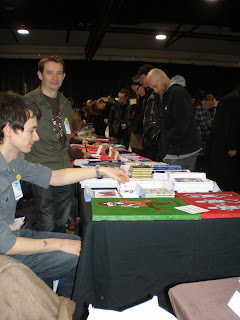 ...there was additional representation on stalls from Jack... 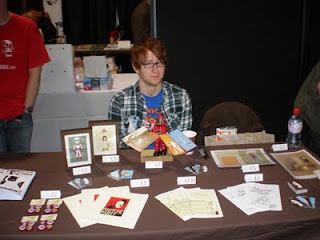 ...Ben Clark and Terry Wiley. Add to this the support of non-exhibiting group members Daniel, Lily, Ian Mayor and Oscillating Brow, and it's clear that PJC were out in force.

For a more detailed rundown, please check out the blogs of those above.
Posted by Paper Jam Comics Collective at 10:18 AM No comments:

Space Monkey, our new anthology (and the first one made for kids), has been reviewed in the latest installment of the Small Press Big Mouth podcast.

As well as giving us her own thoughts, reviewer Stacey Whittle had her daughter Alice come on and give an eloquent summary of what she liked about the book. Coming from our target audience, this was praise gladly recieved. Thank you ladies!

You can listen to the podcast for yourself here.
Posted by Paper Jam Comics Collective at 9:36 AM No comments:

The PJC collective will be out in force at the Leeds Thought Bubble convention on Saturday 21st October. Manning the stall and selling their goods will be Andy Waugh, Gary Bainbridge and Paul Thompson, with support/derision from Jack Fallows (who'll be manning his own table) and Mike (who'll be running the Travelling Man table). Collective member Terry Wiley will also have a table somewhere in the area, adding to an already formidable North East contingency.
This will be the convention debut of our newest anthology Space Monkey and will also be a chance for people outside of the North East to pick up copies of our previous titles (providing stocks last). In edition to these, there are exciting individual titles to pick up. Jack and Gary are both launching new works - the first part of Jack's new series The Big Bang and Gary's new tome Grainger Street. Meanwhile, Andy has two new comics - including the TB exclusive Blether - and a painting (or two) to sell. All this, plus the usual titles from the collective and friends.
If you're coming along, please stop by and say "hi" to the guys (or "hello" if you're that way inclined) and show your support. Mexican waves are always encouraged.
Posted by Paper Jam Comics Collective at 11:20 AM No comments: