It has been a year. A good year.

Here are some things that happened.

That @mrmrduckett has been up to it again, drawing. Here's what he drew at our last meet. pic.twitter.com/1LOsNOsMrI
— Paper Jam Collective (@PaperJamCC) February 13, 2017

That @terrywiley_idcm is showing us paintings that will be for sale at @CannyComicCon -18th March. pic.twitter.com/LU9hBRwpJ4
— Paul Thompson (@Paulxthompson) February 23, 2017

And we attended Biblio-Con, we made some great friends there.

We invaded The Exchange in North Shields for their Originals event, a great afternoon of local songwriters.

The @PaperJamCC at The Exchange in Shields. There is music and beer. Come visit! pic.twitter.com/oLQyvfeKfO
— Paul Thompson (@Paulxthompson) March 5, 2017

Oscillating Brow took PJCC on the road, all the way up to Dunfermline Comic Con.

We launched our first full colour comic, Amazing Adventure Comics Machine ... and that. A comic aimed at younger folks. 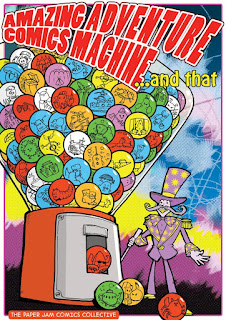 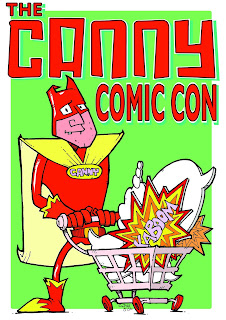 The comic was launched at the one and only Canny Comic Con.

We had a super nice time in Newcastle. Hope Canny Comic Con is on again next year! #cannycc pic.twitter.com/m8joSAyBGu
— Panels Publishing (@panelscomix) March 19, 2017

We made some great mini comics, then announced our new anthology.

On the road again, to Scribblecon. This time thanks to Mike D.

Had a great day at #Scribblecon with @gogorobotendo and @paizybones only a small haul, but had a fun time 🤓 pic.twitter.com/p47MTbKUhG
— Jojo El Jobby Ozzy (@kickmeiamadog) May 14, 2017

More things took place at The Exchange in North Shields.

Wonderlands! A great day with amazing comics creators and best of all, just one city over. 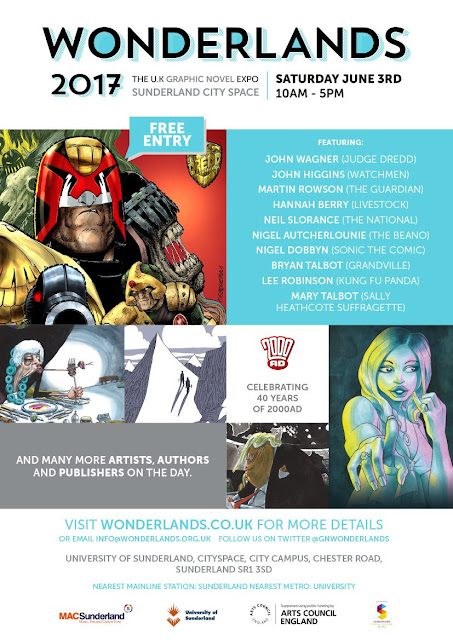 We also started to see the first pages for our next anthology. Bad Decisions... and that. This one's by Mike D. 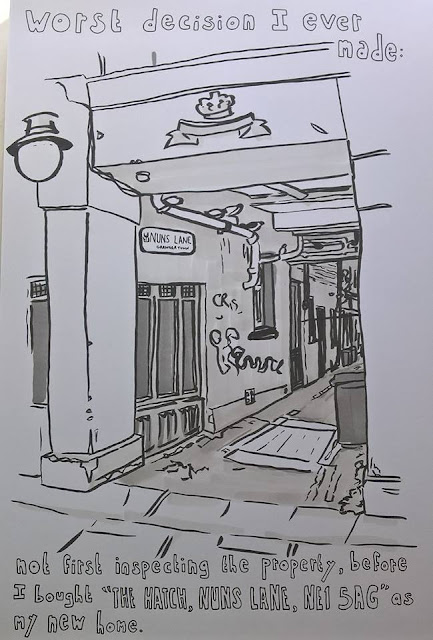 And tonight on #comicsinthepub I'm reminded by @PaperJamCC of the importance of the democracy and vital self-expression of the small press. pic.twitter.com/tKUyIQfUa9
— Andy Oliver (@AndyWPOliver) July 6, 2017 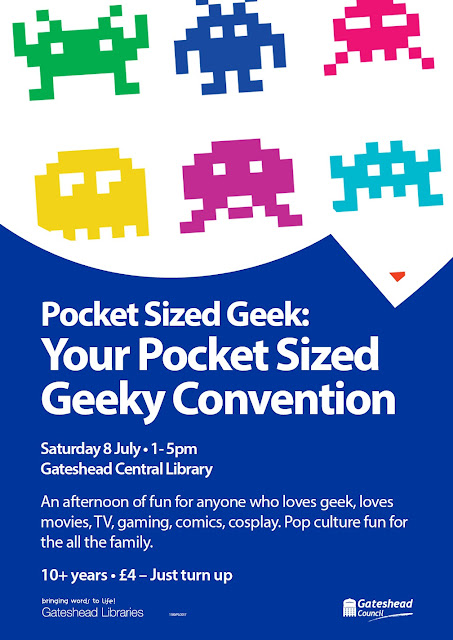 What happened in August? The deadline for Bad Decisions was reached and we got to behind the scenes work to print it. And we got a lovely review in Broken Frontier for Amazing Adventure Comics Machine.

A week on Saturday we'll be at @TyneBankBrewery! Sellin' comics and runnin' drawing games. Much else interesting also afoot. Will be tops. pic.twitter.com/3jqlLuoLzb
— Paper Jam Collective (@PaperJamCC) September 7, 2017 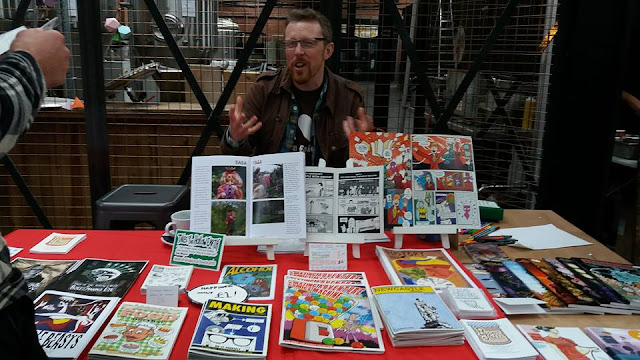 Much fun was had.

By now you've noticed that we should have been talking about these things all year round. We're not the best at keeping our blog updated. If you want the most up to date happenings you should probably follow us on Twitter.

Anyway, back to October. 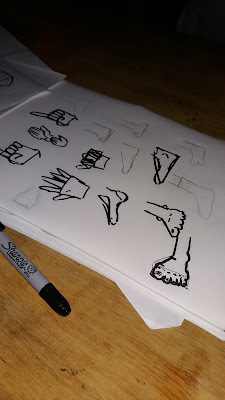 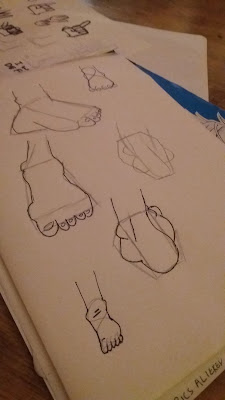 We tackled the hard stuff, drawing hands and feet. Feet are harder.
And we launched Bad Decisions ... and that. 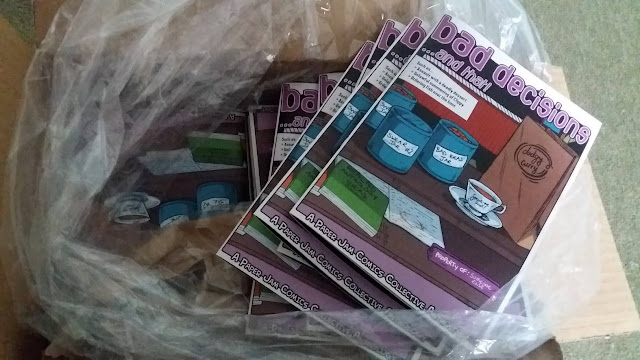 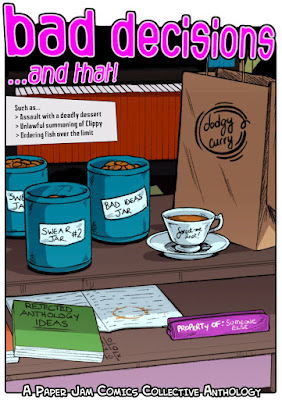 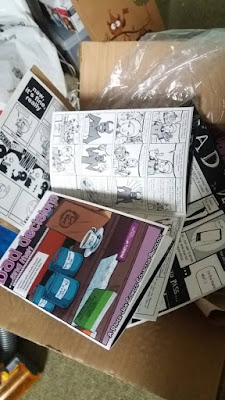 Specifically, we launched it at our second appearance at Tyne Bank Brewery's market. 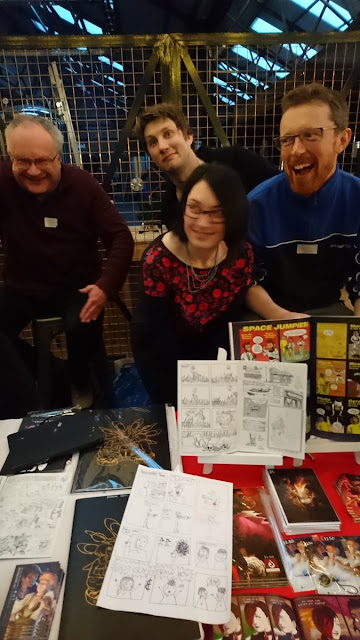 And we got another review! This one from a younger reader.


Plus Steven Flanagan drew us while at the Tyne Bank.

We held our first full meeting at Bar Loco, it's a lovely place. And I finally got round to putting our new anthology on the web shop.

Wondering where you can buy our latest anthology? Bad Decisions... and that is now up on our Comicsy: https://t.co/eW9R4asUdG pic.twitter.com/N7as5wrrLC
— Paper Jam Collective (@PaperJamCC) November 10, 2017


And we got a new folder. 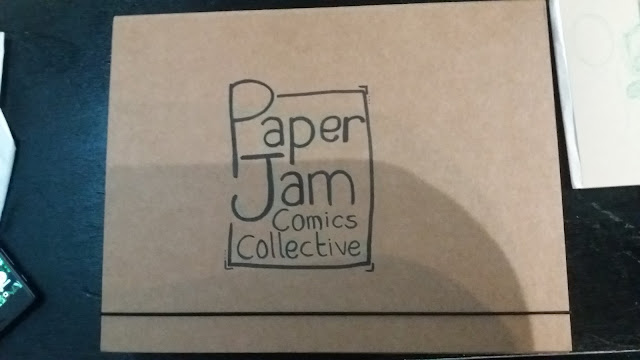 We uploaded some cracking 24 minute comics and jam comics to our jams blog.

Various Jams - have been uploaded to our comic jams blog including the one below.https://t.co/u72WhDO47L pic.twitter.com/55uJ3UDmB5
— Paper Jam Collective (@PaperJamCC) December 15, 2017

And we schemed and plotted the next anthology. We're not 100% sure what it's all about yet but it appears to have a romance theme.


So that was it. That was 2017. PJCC has accomplished many things. Surviving its 11th year and now into its 12th. What adventures will 2018 hold?

Well, our first adventure is the first meeting of the year, 11th January. In Bar Loco from 7ish. Top floor.
Posted by Britt Coxon at 3:37 PM No comments: